What are you a fan of?

YouTube gives you a platform to grow an audience and monetize fandoms for anything — sports teams, TV shows, movie franchises, board games, video games. It doesn’t matter what it is.

I’ve had experience working with YouTube fan channels for brands that had their own passionate fandoms, including Top Gear, “Doctor Who,” “Sherlock” for the BBC and “Mr. Bean.” But I haven’t run a fan-led channel.

For that, I talked to Robbie Lyle, founder at AFTV Media (formerly Arsenal Fan TV), a YouTube channel for fans of my favorite soccer team: Arsenal F.C., based in North London here in the UK. AFTV speaks directly to fans about Arsenal news and post-game talking points.

“Before we came around, it wasn't really done that way,” Robbie says on this episode of Pro Channel Manager podcast. “It was normally pundits and so-called experts, but we kind of throw the floor open to the fans.”

The advice he shared is actionable and replicable for working with any kind of fandom on YouTube. Even if you’re not a soccer fan or an Arsenal fan, you can learn so much from Robbie about tapping into a fandom and turning it into a thriving YouTube channel and brand.

There was no particular sea change for AFTV, but a few moments in the channel’s history served to push it ahead.

There was the video of a fan expressing our collective anger at the club’s inaction after Arsenal lost to Aston Villa in the first game of the season last year. That was the first time Robbie heard from mainstream newspapers asking to use his video.

“That is when I started to think, you know what? We're moving on to another level,” he says.

Another push was an interview with Gary Neville after the Sky Sports commentator insulted AFTV on Twitter. After AFTV responded, using the force of their own substantial audience, Sky actually invited Robbie on for a head-to-head with Neville. It was the first time he’d been put up side-by-side with traditional sports media, which often looks down on independent creators.

“After that, a lot of them changed their opinion and started to realize that hey, these guys are serious players,” Robbie says.

Still, fan channels don’t play in the same arena as mainstream media, regardless of how big they get, how much money they make or how influential they become.

AFTV doesn’t have the same access to players, and it doesn’t have the rights to show games — pretty big drawbacks for a football-based channel. Being forced to get creative has helped them tap into something the mainstream coverage doesn’t get: fan voices.

“Some of the fans that we speak to, their videos will get way, way, way more [views] than if we spoke to a player,” Robbie says. “Because people are more interested in hearing from them.”

An inevitable consequence of working with fandoms is occasional backlash from fans. They tend to be unforgiving of errors and intolerant of opinions that go against their own.

Robbie’s just learned to accept it as part of the job.

“When you get bigger, you're open to more criticism,” he says. “I realized that you can't please everybody.”

Besides, they must be doing something right to have more than 1 million subscribers and more than 30 million views on YouTube every month. Robbie just has to remind himself that there are dozens of quiet fans for every one leaves a negative comment.

“My mom used to have a saying: ‘Robbie, when they stop talking about you, you’re not worth it.’ So as long as they're talking, it's all good,” says Robbie.

The Drawback of Relying on Fandoms

Tapping into an existing fandom is a great way to build an audience around your channel. But the drawback is that your entire business relies on what someone else is doing.

A lot of YouTubers have seen huge drops in ad revenue during the coronavirus pandemic, but AFTV has been hit even harder than most.

“Our whole thing is football, and there’s no football out. None,” Robbie points out.

The channel normally would depend on a game day to build momentum and inspire content for its videos. Without games, they’re needing to change course.

For AFTV, that means shifting their focus completely away from making money. Instead, their purpose is to provide a service for football fans — who also are trying to get by with a lack of sports in their life.

“I just look at it that we're providing the service at the moment,” Robbie says. “Not really getting paid for it, but sometimes you have to do that.”

The hope — and the advantage of tapping into hyper-dedicated fans — is that the channel will continue to grow throughout this time, and fans will remember the service it provided when this tough time is over and come out the other side with goodwill for the brand. 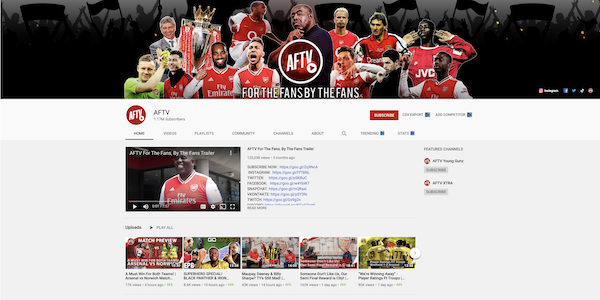 How Do You Know When to Go Full Time?

About three and a half years ago, Robbie left his full-time job to focus on AFTV. The channel was doing well, but he was by no means in a perfect position to take the leap.

The channel had about 100,000 subscribers and a couple million views per month, and it was growing. But Robbie had no savings, and he was making a living from a secure job.

“It was a hard decision, because, obviously, my wife and kids and people around me saying I'm crazy,” he says.

But he knew he couldn’t wait until it felt comfortable — because it never would. He knew he’d only be able to grow the channel into the business it’s become by leaving his job to focus on it.

“Something inside of you will be telling you, you need to do this full time. And you've got to go with that,” he says.

It’ll never be the perfect time to go out on your own. Instead, Robbie says, you’re going to have to take the risk of listening to that voice inside of you telling you it’s time to dedicate yourself to the venture.

How AFTV Operates a 1.2 Million-Subscriber Channel

Behind the scenes, AFTV runs a very lean team — only five people:

Plus, Robbie, who works in all areas of the company. Fans who are interviewed after games aren’t generally compensated, but AFTV works out individual contracts with people who start up a regular program on the channel.

They pride themselves on delivering quality videos with speed, because that’s the only way to be part of the conversation with something that moves as quickly as football.

When they have an idea, they go for it and get the video out before the conversation dies down.

“There's no time for not executing ideas,” says Robbie. “We've always worked off of that premise — execute your ideas, and get the videos out quick.”

AFTV makes the majority of its money from YouTube ads, but it also has other revenue streams, and at times a bigger chunk comes in from sponsorships than YouTube ads. They plan to make a big push to diversify their revenue, including more sponsorships, continued merchandising, and eventually live events.

“I'm looking at a lot of different revenue streams now apart from just traditional advertising, because there are other revenue streams out there for YouTubers or for influencers,” says Robbie.

Focus on Your Audience

Robbie’s No. 1 piece of advice for any YouTube channel manager is, “Understand the people who watch your channel. Don't take them for granted.”

Read the comments, he says, and respect and listen to your viewers. Treat them as individuals, not just as numbers in your analytics. Developing that community and loyalty is key to growing as an individual creator.

“If they feel like they're part of a movement, they'll stay with you,” Robbie says, “and they will help you grow.”