Success on YouTube is not only about making great content. Sure, it’s massively important but it’s not everything. I mean what’s the point of creating a masterpiece if no one ever clicks on it? Or worse it never gets put in front of anyone at all?

Making great content is an art. Making it discoverable is a science.

There is an elite group of professional YouTube channel managers, that understand this science and know exactly what levers to pull in order to reach the audience (and revenues) that these videos deserve.

Some of these Pro Channel Managers are working for big companies, some are working on their own channels in their bedrooms, and many are somewhere in between, but one thing that they all have in common is that they are SERIOUS about their YouTube education and that the numbers simply don’t lie.

Here at Pro Channel Manager we are working to nurture the next generation of YouTube Professionals. A channel manager that can work with any type of content and get it seen, work on a channel in any niche and grow it by multiple factors and walk into any channel and start to increase its revenues on day one.

We’ll provide you with some awesome free content in the form of our Blog that focuses on advanced YouTube tactics and insights – sorry beginners this isn’t the place for you.

Our incredible new Podcast will also provide some serious YouTube education, but it won’t be like those other dreary, vanilla podcasts you’ve heard in the past. This one’s for grown-ups and will feature never heard before YouTube tactics as well as actionable interviews with some of YouTube’s biggest names.

If you’d like to get direct training from the world’s leading experts who will be sharing tactics that don’t get shared in your run-of-the mill videos and guides then our Academy is the place for you. With our hyper-tactical training courses, expert coaching and a community full the best of the best YouTube has to offer, you will get the methods, motivation and mentorship to elevate you to the status of a Pro. 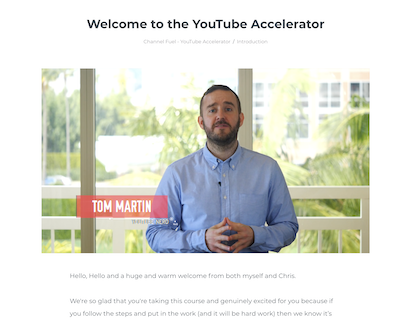 My name’s Tom Martin, I’m the lead instructor here at Pro Channel Manager and I’ve been a Professional YouTube Channel Manager, operating at the highest levels,  since 2012.

For the channels I’ve managed I’ve generated tens of millions of subscribers and Billions of views and have generated more AdSense dollars than my abacus can handle.

• I've launched channels from scratch that have now passed a million subscribers - ever heard of Doctor Who?

• Taken channels that were doing well and accelerated their growth - like when I grew the Top Gear channel from 750,000 subscribers to 3.5 million in just 12 months.

• And turned around the fortunes of once great channels that had fallen on hard times such as last year implementing a strategy that took the Mr Bean channel from 25 million monthly views to over 160 million in just 9 months.

But it's not all glossy TV stuff. I've worked with honest to goodness YouTube channels - some of which you've heard of and some of which you haven't - to help show them which small tweaks could have massive impacts on the success of their channels.

Whether it's the way they are doing their tags (almost always wrong) to how they are creating calls to action at the end of their videos (can always be improved), there are usually leaks in a YouTube channel that can be plugged and I’ll teach you how to spot these in your own channels and your client’s channels.

So if you are ready to get serious about YouTube, whether that’s taking your own channel to the next level or starting a whole new career growing YouTube channels for clients, you are only a few clicks away from the knowledge, tools, systems and community that will get you there.

See you on the inside