Derral Eves remembers the first time he learned about YouTube.

He was scrolling Craigslist, looking to snag a free desk for the new guy he hired at his web design company, when he saw an ad for the brand-new website. This was October 2005, and Derral was blown away. It was the first time he saw a video that didn’t constantly stop to buffer. Plus you could embed these videos on websites.

He began creating videos for his clients’ websites, and they were a hit.

“It was very disruptive at the time,” Derral explains. “Nobody was doing it, and I got really good at seeing what people would respond to with video.”

Derral sold his company and went all in with video. Fast forward, and today he’s the CEO of Creatus, an online digital agency with big-name clients like Amazon, Netflix, Nintendo, Red Bull and Epic Games (think: Fortnight). He’s also the founder of VidSummit.

To put it frankly, there are a lot of people out there who offer up YouTube advice, and I don’t listen to many of them — but I always listen to Derral. He has a ton of experience and practices what he preaches.

I was lucky enough to have him to join me for a live event in the Pro Channel Manager Community. (Use promo code “podcast” for a special discount when you join!) There, he took us through the journey of how he got into video, what makes YouTube videos successful (hint: it’s not always about keyword research!), getting channels to grow and answering questions about his new book “The YouTube Formula.”

His buddy started a pest control company, and Derral was keen to experiment with video marketing. His friend gave him the green light, and within about two months Derral had quintupled his business.

Then there was the piano store. They wanted to use YouTube to sell grand pianos. The videos they were creating were really cool (like pianists playing on the side of mountains), and the channel had about 20,000 subscribers at the time. Over the next 18 months, thanks to Derral, the channel grew to 1.8 million subscribers, and the videos were getting hundreds of millions of views.

Since then, Derral and his team at Creatus have generated more than 60 billion views on YouTube. Additionally, they’ve helped 24 channels grow from zero to 1 million subscribers.

Derral suspects there are a few reasons for his success. For one, he’s passionate about what he does — you know the saying, “If you love what you do, you’ll never work a day in your life…” Additionally, he’s constantly learning and consuming new information.

He also does something interesting that’s worth mentioning: He takes equity in companies he works with. So instead of just being a consultant, he’s part owner.

Of course, Derral isn’t giving away all his nitty-gritty secrets (you’ll have to read his book for that), but he did share a ton of intel in his chat with the Pro Channel Manager Community.

One of the most interesting takeaways from the talk was this: Stop optimizing for a search engine. Optimize for people.

Sure, keyword optimization is important — Derral won’t deny that — but he urges YouTube channel managers and creators to go beyond that and think about how to optimize for humans.

Here’s an example: You’re a passionate, lifelong Yankees fan, and you come across a YouTube video that’s titled, “Red Sox are Better Than Yankees.” Are you clicking? Maybe. But what if I shared a video titled, “Red Sox Could Beat the Yankees.” You may be slightly triggered. The title of that video is tapping into an emotion, and it’s going to increase the chance that someone will click.

Now, you don’t want to disregard keyword research all together. That’s still important. For Derral, it gives him a good data point to prove there’s interest in the topic, “but I look at it as how's it going to be received by the end person? And can we make it more clickable?” (Keyword research is also great when starting a channel — see more below.)

How to Grow Your YouTube Channel: Tips From Derral

Growing a YouTube channel doesn’t happen overnight — we know that. But there are some ways you can help ensure your channel’s success. Here are some of the YouTube tips to grow your channel from Derral.

When Derral sets out to launch a new channel, he needs to know exactly what that channel is going to look like. He spends a good two to three months figuring this out.

“We're going to get data in, and we're going to make adjustments along the way, but if I don't understand the value proposition, then I'm just throwing up content — there's no strategy behind it,” he says.

His team launched a channel at the beginning of 2021, but the ideation and content creation started back in October — they had more than two months of content ready to go before the channel even launched.

The channel, by the way, had more than 100,000 subscribers just three months later.

With this new channel Derral and team created, the first video they posted was keyword-focused. Yes — Derral puts less emphasis on keywords, but they’re still important, especially when you’re starting a channel. Here’s why: You need to help people start their experience with your channel.

If you can optimize a video and get those high-intent viewers to your channel, great. Then you can recommend a video, and people will watch that (make sure it’s really good), and then before you know it, your videos will start popping up as suggested in “up next.”

Derral suggests doing that consistently, and then the idea is YouTube will begin to do its job and find the right video for the viewer.

Looking at his new channel, Derral says the first video they did for search gets minimal views now compared to the other content, but for them it was a great launching-off point.

3) Add Value and Create an Experience

During our talk on the Pro Channel Manager Community, one attendee asked how he could get over a bit of a plateau on YouTube. He’s been managing a channel about breathing exercises for two years now, and it’s growing (about 75,000 subscribers), but the revenue just isn’t budging.

Derral’s advice? Understand why people are looking for these breathing exercises.

“Just teaching them something to de-stress isn't necessarily going to bring you a ton of use — it's just not,” he says. “But if they can experience something — to get them to de-stress while learning something or while using something that you've taught them — then that's where it's amplified.”

You can find identical channels out there with identical content, but one of the channels decides to add more information and context around the keyword or topic — like bonus information. Derral says that channel, the one going above and beyond and offering even more value to the viewer, is going to get way more subscribers and views. A great example of a channel that does this is Yoga With Adriene. Her channel has become more than just a how to channel - it's become a community - or a movement even. 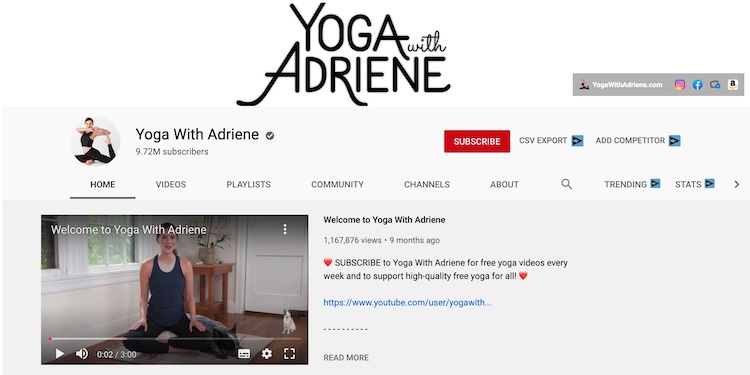 It’s also essential the information you’re sharing is straightforward and easy to understand — and even easier to share.

For this particular case, Derral suggested creating this content on an ancillary channel.

“Look for opportunities,” he says. ‘Don't accept what's always been the best route.”

For instance, a big YouTuber recently reached out to Derral for a consult, and Darrel realized they just needed to simply change one of their misconceptions. They were posting two videos a day, but he encouraged them to shift their posting schedule to align with their audience more, and they doubled their views — from 200 million to 400 million.

“Don't ever fall into the trap that what you're doing is the right way,” he says.

5) Surround Yourself With Smart, Motivated People

Even if you’re a solo channel manager and don’t have a built-up team like Derral, it’s still essential you surround yourself with amazing people.

Join a mastermind group, employees at your company or an online community (S/O to the Pro Channel Manager Community). 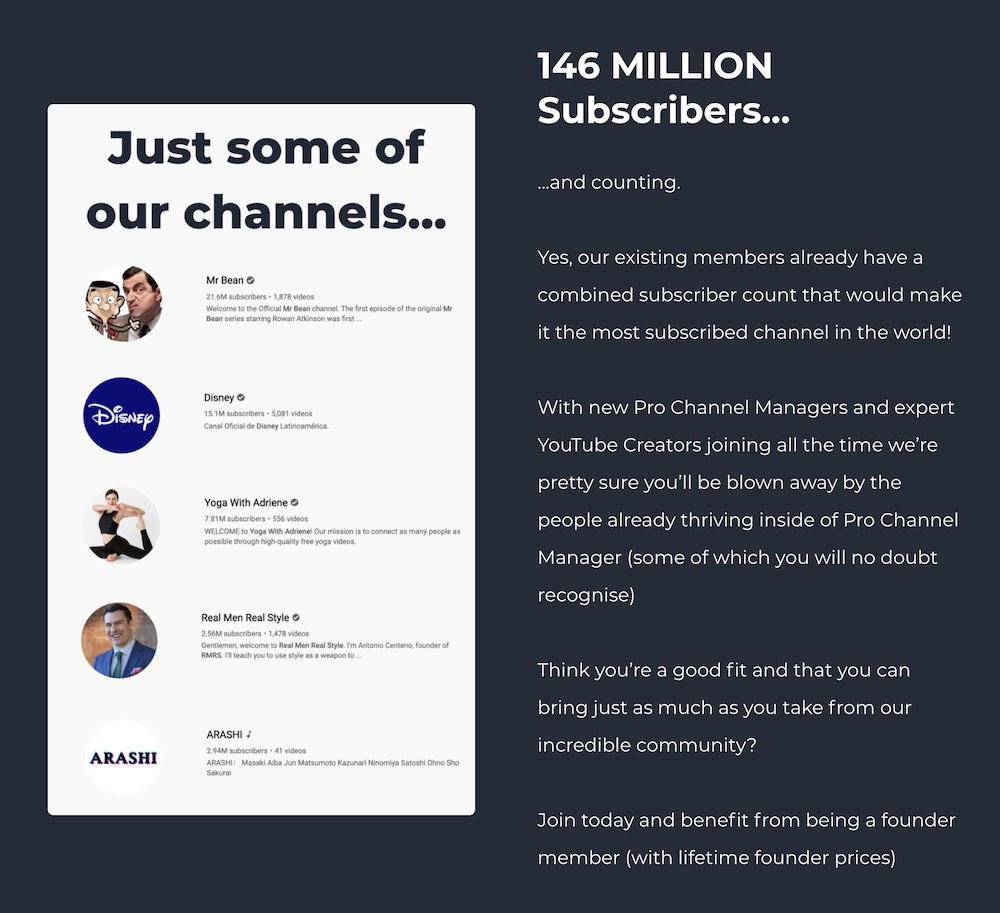 “A lot of people that struggle, struggle because they don't have a support group,” Derral says. “I can tell you that for every YouTube success story, there was a community around that success story.”

Surround yourself with positive people who are willing to learn from their mistakes and lift you up.

If you’re itching to learn more from Derral, be sure to listen to this podcast episode and to check out his new book, “The YouTube Formula,” where he shares all his secrets.

If you don’t want to miss out on future live events, be sure to become a member of the Pro Channel Manager Community. Use code “podcast” for a nice little discount.