How does marketing your local small business on YouTube translate to real life? Can you actually get people to pick up the phone? Visit your store? Book an appointment?

Sounds like a big leap, right? But it’s quite doable. Take it from Roger Wakefield, a world-famous plumber. (He prefers to just be called a social media-savvy plumber, but I think he’s being a bit too humble.) 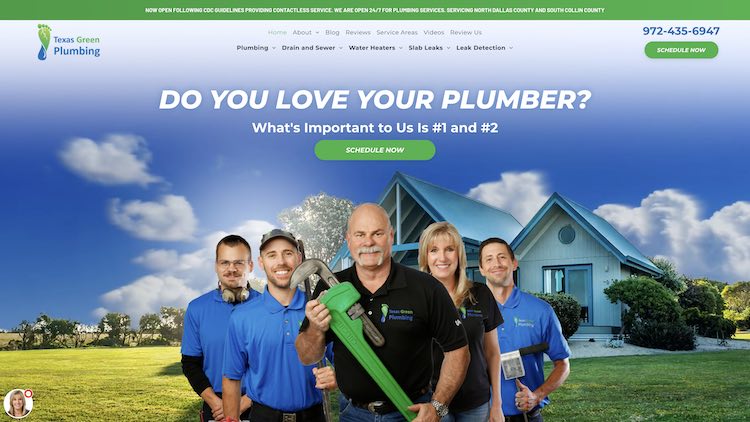 Really, Roger is the poster boy for getting customers from behind a computer screen and through the door of a brick-and-mortar business, whether that’s a vet clinic, plastic surgery office, boutique, salon, market — you name it.

And here’s the thing: Three years ago, Roger knew nothing about YouTube or social media marketing. Today? He’s got 290,000 subscribers and more than five+ videos with over 1 million views on his YouTube plumbing channel.

So how did he create a local video marketing strategy? And how can you do it? Roger talked me through his process and shared everything from his rules of thumb to his revenue breakdown to his future plans.

And before we dive in a personal thank you to Roger for teaching me what I thought was impossible - Local YouTube SEO.

The Origin Story of Roger Wakefield: ‘Be The Best Plumber on YouTube’

Roger stepped into the world of social media marketing in early 2018 after attending Social Media Marketing World. He was there because, quite frankly, he was tired of paying marketing companies thousands of dollars to market his Texas-based plumbing business with no results. Honestly, his goal was to just pick up a few tips to get better at Facebook.

But then he stumbled on a session led by Derral Eves, who, he quickly realized, is one of the biggest names in YouTube and video marketing. After the 45-minute talk, Roger was determined to grow a YouTube channel for his plumbing business.

He attended more and more conferences, including Vidsummit, where his stepson attended one of my talks. Not to toot my own horn or anything, but his stepson left and, within a few hours, had 28 weeks of video content planned out, three videos a week.

Roger’s newfound goal? Be the best plumber on YouTube. Now how did he go about this?

Aside from attending conferences and teaching himself as much as he can about YouTube, here are two essential pillars Roger says every YouTuber should keep in mind when creating content.

Rule No. 1 to gaining viewers and subscribers on YouTube: Create videos for the viewer. You’d be surprised how many YouTubers forget to cater to their audiences — to provide them value.

“Everybody talks about the algorithm, but at the end of the day, we have viewers on the other side of the camera,” Roger says. “If we create videos for them and think about the questions that they're going to have, the thoughts they’re going to have… we can bring value to them.”

This, Roger says, is something you have to think about before you even hit record. If you do that, you can do well on YouTube.

Roger believes in this so much that he doesn’t add a call-to-action at the end of his videos. He never says, “Hey, if you don’t fix the leak, give me a call!” He’s had folks tell him that’s a bad idea, but he never created his YouTube channel to sell to people. For him, it’s all about the value.

“If people find value in what you do, they're going to find you,” Roger says. “I want to bring value to this viewer, and this viewer is going to say, ‘I need to learn more. I need to call him.’”

You might be wondering what the heck is entertaining about plumbing, but let me say, Roger has found a way to have fun with his viewers and make them laugh.

He admits he had the same concern initially — what’s going to be funny about plumbing? When he posed this question to Jeremy Vest, a YouTube expert who Roger worked with, Jeremy told him about a video he made about reading barcodes. How boring. But at the time, the video had more than 2 million views.

That’s when Roger knew it’d be possible to make this work.

Yes, at the end of the day, this goes back to his No. 1 tip: Create value for your viewers. But just because a topic is traditionally dry doesn’t mean you can’t add humor and make your viewers laugh.

When Roger initially had the idea to build out a YouTube channel, most YouTube pros he approached told him, quite plainly, YouTube for small businesses wouldn’t work. How can you sell your plumbing services on a global platform? It’s not like the Texas-based plumber can make house calls in Japan.

But here’s how Roger started thinking about his strategy: YouTube and Google work similarly. They’re basically fraternal twins. So, when he started making videos, he started thinking of them like articles on a website. He had to build out his video content and become an authoritative source.

He’d had an SEO specialist tell him he needed to build out web pages for key terms, one for each of the areas he services. Think: “plumbing Dallas,” “plumbing Richardson,” “plumbing Plano.” Then, he could get more specific with water heaters, slab leak detection — you name it — for each area.

So, he took this approach over to YouTube, and he found, even when he added the name of a city or town to the video title and description, it still got good traction because he wrote the title and description differently each time. It really didn’t matter where the viewer was located.

This, Roger says, helps him get in the good graces of the YouTube algorithm gods, because now, when folks search “slab leak detection,” several of Roger’s videos pop up.

As Roger and his team built up their video arsenal, YouTube saw him as more and more of an authoritative expert on these matters — hence more and more videos ranking in search.

Plus, in my opinion, the fact that he doesn’t blatantly sell to people — encouraging them to leave YouTube and go to his website or give them a call — helps him. YouTube obviously doesn’t want viewers leaving their platform, so it’s likely helped Roger that viewers aren’t bouncing from his videos right away.

The Results: A Revenue Breakdown

Again, this wasn’t an overnight success. Roger estimates it took about six to nine months before he started seeing his YouTube strategy take hold.

Fast forward, and Texas Green Plumbing recently secured three slab leak detection jobs in a day. If you’re not an expert plumber, it’s worth noting these jobs range from a $5,000 to $100,000 job in the Dallas area. Three of those? That’s a big deal.

And that’s just one piece of the pie. Roger broke down his revenue sources:

He also shared that, in the past year, his CPM is just under $15 and — which I’d say is pretty top-notch.

And a bit more on the sponsorship piece. Roger says he’s only done one brand deal, but it’s with one of the largest plumbing supply companies in the world. He posts one branded video a week, and Roger negotiated that he’ll still have 100% creative control over these. Very smart and very important.

In the short term, Roger is working on building out a referral program. If someone comes to Texas Green Plumbing who’s out of the service area, Roger’s team will have plumber partners they can refer these customers to.

Bigger picture, Roger wants to focus on the education piece.

Right now, he’s working on starting a podcast, publishing a magazine and creating digital courses. His big goal is to establish a conference for tradespeople.

“Don't stop,” he says. “Once you get started, once you get into that routine, don't stop.”

Some additional resources and tools Roger recommends include: